Theory and Operation of Dynamometer

Dynamometer is a measuring device for recording and displaying power and torque of an engine.  Its method of measurement is a direct implementation of the definitions of power and torque. Correction factors assist in the comparison of these measurements under various test conditions, making computer hardware and software necessary to obtain, interpret, and display the data. 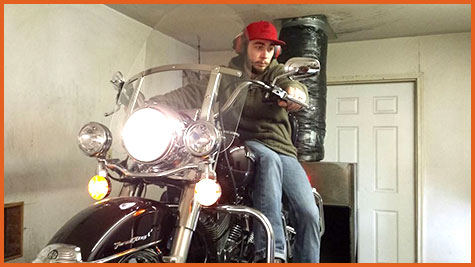 Power in mechanical terms is the ability to accomplish a specified amount of work in a given amount of time.  By definition, one horsepower is equal to applying a 550 pound force through a distance of 1 foot in one second.  In real terms, it would take 1 HP to raise a 550 pound weight up 1 foot in 1 second.  So to measure horsepower, we need to know force (in pounds) and velocity (in feet per second).

Power is coupled to the drum by friction developed between the driving tire of the vehicle and the knurled steel surface of the drum of the dynamometer.

When an object rotates around a point, its speed of rotation depends on both applied force and the moment arm.  The moment arm is the distance from the point of rotation to where the force is being applied.

Torque is the product of the force and the movement arm.  For example, if a rope, wrapped around a drum of 1 foot radius, is pulled with 550 pounds of force, the resulting force is 550 foot-pounds.

The Torque on the dyno's drum can be calculated by multiplying the force applied by the drum's radius.  However, engine torque is not equal to drum torque because the gearing through the drive train changes the moment arm.  The change in the moment arm is proportional to the ratio of engine speed to drum speed.  Therefore, tachometer readings are necessary to calculate and display engine torque.

The calculation of horsepower or the accuracy of our dynamometer is not dependent on the location or conditions during the measurement. The performance of the internal combustion engine is, however, sensitive to atmospheric conditions, especially air density and air temperature.  To compare power measurements taken at different times or places, it is necessary to compensate for differing atmospheric conditions.

Correction Factors are used to compensate engine horsepower measurements for differences in operation conditions during engine testing.  The typical correction factor (CF) is calculated based on the absolute barometric pressure, air temperature and water content of the air used for combustion by the engine under test.  It attempts to predict the horsepower that would be developed if the engine were tested at sea level under standard pressure and temperature conditions.

During a run, the data is storing in the dyno electronics memory.

After a dyno run is finished, data from the dyno electronics, calibration data and users notes are saved to a file on the computer's hard disk.  Each run file is saved in a directory structure composed of "Make", "Model" and "Name" which organized the data for quick and easy retrieval.

When the user selects a run, the data is loaded from the hard disk into computer memory.  Data from up to twelve runs can be placed in memory at once.  This information can be used for either viewing horsepower graphs or racing vehicles.